Keith Miller and Steve McIntyre of North Plainfield, Somerset County, have been together for 35 years. (Photo courtesy of Steve McIntyre.)

Steve McIntyre and his husband Keith Miller don’t have children.

Together for 35 years, they never longed for parenthood. And legal protections for the LGBT community have lagged so far behind other marginalized groups that same-sex marriage wasn’t federally protected until 2015, and same-sex adoptions even later, in 2017.

“Given the state of equal rights, it just didn’t occur to us as a possibility,” said McIntyre, now 57.

But the Somerset County couple never regretted choosing childlessness. They’re not tethered to school calendars and they dodged the crippling costs associated with child-rearing. Their fatherhood fix comes from their nieces and nephews.

Yet as they get older, a nagging question persists.

“Both of our parents are aging. All the stuff we’re doing for our parents right now, I think: ‘Who will do that for us when we’re that age?’” McIntyre said.

For generations, people have relied on their children for caregiving and help as they grow older. But the average American family is changing: As marriage and fertility rates decline, more people are entering their advanced years alone.

While rising childlessness is not a new trend, it’s accelerating: More than 16% of the 92 million adults age 55 and older in the U.S. were childless in 2018, according to a new report from the U.S. Census Bureau. That’s almost one in six older adults (compared to one in 11 adults 75 and up).

The trend has far-reaching implications for public policy. From transportation to public safety to daily care and companionship, older adults without kids to count on for assistance need public officials to ensure a sturdy safety net exists, advocates say.

“There’s definitely this emerging wish by elders today to age in place, in their community. The older childless person has got to put a little more work into it, on many fronts,” said Dave Burdick, director of the Stockton Center on Successful Aging. “Our legislators can help with that, but any legislation needs to address the biology, the psychology, and the social aspects of aging.”

As the population grays, the need for community-based social services will grow, and governments bear a critically important role in funding them, said Dr. XinQi Dong, director of the Rutgers Institute for Health, Health Care Policy and Aging Research.

“Older adults’ frailty remains another epidemic that we face and will continue to face,” Dong said. The trend toward childlessness “requires a workforce that can provide the physical and emotional support for older adults who can’t rely on family members,” he added.

Recognizing the trend, New Jersey lawmakers have enacted a number of protections in recent years.

In March, Gov. Murphy signed the LGBTQI+ Senior Bill of Rights into law, barring long-term care facilities from discriminating against residents based on sexual orientation, gender identity and expression, intersex status, or HIV status. In June, lawmakers passed legislation — still awaiting the governor’s signature — to protect residents who work past age 70 from workplace discrimination. That’s a key protection because more childless seniors work than those with kids, and more seniors in general are working past retirement age.

But more action is needed, according to advocates for the aging.

Assemblywoman Carol Murphy (D-Burlington) has twice introduced a bill in the Legislature to create a Planning for an Aging Population Task Force. She doesn’t expect a vote when legislators reconvene in November for a short lame-duck session. But she said she will reintroduce it again in 2022 — and she’s hoping the third time will lead to passage.

“This is very important to me. Within the next 30 years, our senior population is going to grow so humongous. Are we ready to handle it? Do we have the community programs and benefits in place our seniors need?” Murphy said.

Both of our parents are aging. All the stuff we’re doing for our parents right now, I think: ‘Who will do that for us when we’re that age?'

Dong has some suggestions, such as improving transportation services for older adults. These are in such hot demand that many overschedule riders, leading to long delays and wait lists.

And as the prevalence of dementia rises, policymakers must ensure adequate protections are in place for adults who struggle with such cognitive declines, especially if they have no family to advocate on their behalf, Dong added.

Counties should also do local assessments of their elders’ needs, he added. South Jersey and the Jersey Shore have larger populations of seniors — and such different geographies — so their needs will differ from more urban parts of the state.

Raising salaries and strengthening training requirements for professional caregivers also are key, as they will be more in demand as elders age without family supports, Burdick added.

Some specialities don’t require much training at all for certification, Burdick said. To become a “certified dementia care practitioner,” for example, one needs only to complete a seven-hour seminar, according to the National Council of Certified Dementia Practitioners. In contrast, New Jersey requires 1,200 hours of training to become a cosmetologist.

“The demands for paid, paraprofessional care will continue to go up, and we need to make sure those people are competent, capable, and caring,” Burdick said. “The replacement of the family caregiver with paid caregivers, if it’s by underpaid, undertrained, and undervalued staff, is a problem.”

Supports needed for all seniors

While bolstering the safety net for the state’s growing population of childless seniors is important, experts said it’s equally essential to recognize that having children doesn’t guarantee older adults will have the supports they need as they age.

And because society is more mobile than ever before, children might not be around to help when needed, Burdick added.

“Often kids move away for careers, so they’re caregiving at a distance. That makes the experience of aging with no children not dissimilar to aging with children,” Burdick said. “Children are almost like an insurance policy, but we can’t presume there’s a safety net in place just because someone has children.”

That has driven the trend toward what sociologists call “fictive kinship.”

“That’s when people create close friendships and relationships that are almost like their family. So we are seeing more examples of elders banding together in things that are almost communal to care for each other,” Burdick said.

Village by the Shore is one such neighbors-helping-neighbors initiative. Volunteers help ensure seniors in Atlantic and Cape May counties can stay in their homes by carrying out tasks that might make that difficult, such as pet care, meal delivery, technology assistance, and basic home repairs.

Children are almost like an insurance policy, but we can’t presume there’s a safety net in place just because someone has children.

– Dave Burdick, director of the Stockton Center on Successful Aging

That’s an approach McIntyre envisions he’ll rely on as he gets older, even as he acknowledges its shortcomings.

“I live in a tightknit neighborhood, where we help shovel people’s walks after snowstorms,” he said. “But there’s a difference between helping out someone when they’re in need versus being there every day and counting their pills to make sure they’re not over- or under-medicated.” 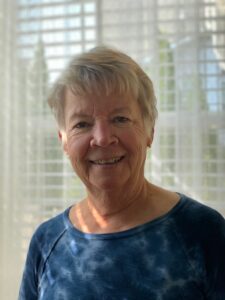 Blakeslee, 74, is a retired psychologist who lives in Manahawkin. She’s the kind of person who so adores children that she waves at strangers’ babies and goes by “Mimi” to anyone under a certain age.

Yet she never had children of her own, “sort of by default.” When she was 18, she became a Benedictine nun. She left her religious order in her 20s to become a teacher and eventually met a man she married. But she was 41 when she married and decided she didn’t want to risk a pregnancy.

“Sometimes I wonder: ‘Will I be in a nursing home all alone?’ I do have that fear of being all by myself, spending Christmas alone — I can get dramatic about this,” she laughed.

But, she added, “children or no children, I would have that concern.”

Childlessness is growing among older adults, with almost 20% of adults 55 to 64 childless, compared to 16% of people 65 to 74, and 11% of those 75 and up, according to recent U.S. Census figures, which uncovered these trends among childless elders: