From left, Lawrence Hamm, Weldon Montague, and Natacha Pannell outside Orange Town Hall during day one of the Long March For Justice. Parnell is the sister of Phillip Pannell, who was shot and killed by officer Gary Spath in April 1990. (Daniella Heminghaus for New Jersey Monitor)

Cecille Hepburn marched for her grandson, Kashad Ashford, who police gunned down in 2014 after a car chase.

Steven Young marched for change, a year after he quit Atlantic City’s civilian review board, which is tasked with police oversight, in protest over its powerlessness.

And Larry Hamm marched because marching is what Larry Hamm does. An activist for 50 years, Hamm heads the People’s Organization for Progress, a Newark-based grassroots group that advocates for social justice issues.

Last Friday, Hamm hit the road to lead a small but hardy band of activists on the Long March for Justice, a nine-day trek from Montclair to Trenton intended to raise awareness about police brutality — and several stalled police-reform bills that state legislators have repeatedly failed to pass.

On Tuesday, the fifth day of their pilgrimage, they marched south on Route 27 in Edison, bookended by police escorts and steeled by the occasional, supportive honks of passing motorists. Carrying signs with slogans like “STOP POLICE BRUTALITY!” and “WE WANT JUSTICE,” they have been marching up to 12 miles a day and expect to end their 67-mile journey this Saturday at the Statehouse in Trenton.

“I’m marching because I want to fight for change, even though it’s just not right we have to fight for everything,” said Hali Cooper, 56, of Englewood. “I just want equal rights for all.”

Cooper said she was marching for her uncle, Samuel Lorde, who she said died in 1998 after officers who relatives called for help when he was choking on food instead responded with force. 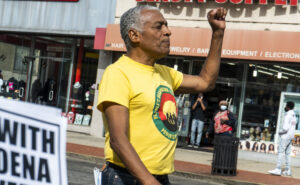 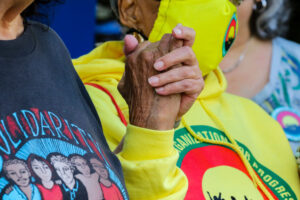 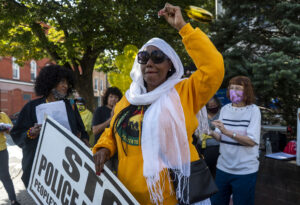 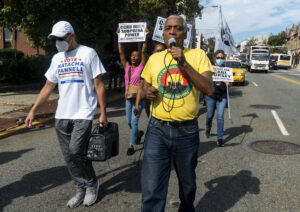 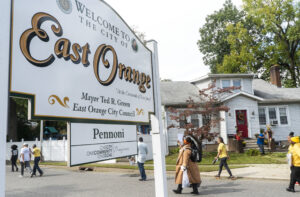 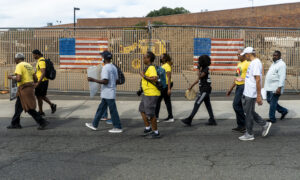 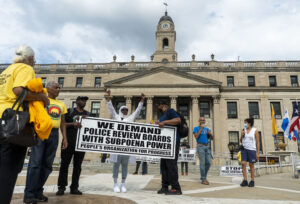 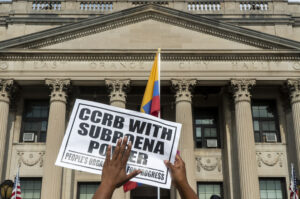 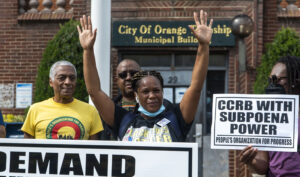 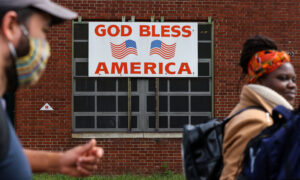 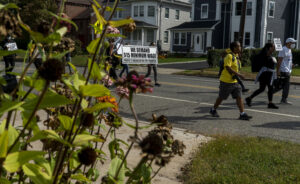 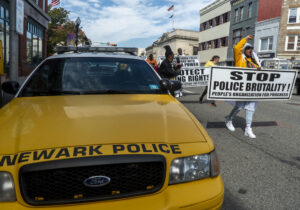 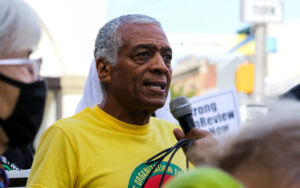 Marchers called on legislators, who will return in November for a brief lame-duck session, to pass several stalled bills that would make policing in New Jersey more transparent and hold officers more accountable for misconduct. Specifically, they demanded that state lawmakers support legislation that would:

They also want Gov. Phil Murphy to veto a bill lawmakers passed in June that would allow police to view body-camera footage before writing their reports.

The protesters didn’t limit their calls for action to state lawmakers. They urged federal policymakers to pass the George Floyd Justice In Policing Act, which would create a nationwide database for police misconduct; require officers to undergo racial profiling training; create nationwide standards for police use of force; eliminate no-knock warrants; ban chokeholds; and eliminate qualified immunity for police. The House has passed it, but the Senate failed to advance it last month.

Marchers cited several other initiatives they hope state and federal legislators will act on too, including bills that would protect voting rights and establish task forces or commissions to study and implement reparations.

The system was not made for us, and we have reached the point where we’re still fighting for things we have already earned. But the fight is going to be an everlasting fight.

Many of these proposed reforms are not new ideas. Hamm remembers famed Newark activist Amiri Baraka fighting to create independent civilian review boards with subpoena powers in the early 1960s.

Hamm and those marching with him this week expressed frustration over the slow pace of reform. They blamed politicians too timid to stand up to the powerful police unions that have battled many reform efforts.

“A lot of them are not willing to take action because they think the police unions will come after them electorally and push them out of office,” Hamm said.

But the fight for racial justice requires persistence and patience, marchers agreed. As marcher Ingrid Hill put it, “we’ve been here 400 years fighting.”

Several quoted various versions of the Rev. Martin Luther King Jr.’s calls to action, including his 1968 refrain that “the arc of a moral universe is long, but it bends toward justice.”

“We demonstrate, we negotiate, and then we legislate,” Young said. “This is not something we’re going to sleep on.”

Hepburn hopes her activism will lead to a better future for her great grandchildren.

“The system was not made for us, and we have reached the point where we’re still fighting for things we have already earned,” she said. “But the fight is going to be an everlasting fight.”