Gov. Phil Murphy was sworn into a second term Tuesday after becoming the first New Jersey Democrat in more than 40 years to win re-election as governor.

“I renew my pledge to be the governor for all of New Jersey, the governor for everyone who voted for me, and for everyone who did not,” Murphy said during his inaugural speech. “After all, we are all New Jerseyans. As diverse as we are, we share common challenges, common cause, and a common bond. Together, we have been through so much, and together we will seek a brighter tomorrow.”

The governor’s swearing-in comes amid dramatic legislative losses for his party. Democrats’ 46-34 majority in the Assembly is at its narrowest since Jim McGreevey was governor.

Gains the party made in the Senate since Murphy was first elected in 2017 have evaporated entirely, once more leaving Democrats with a 24-16 majority. It remains to be seen how well newly installed Senate President Nicholas Scutari (D-Union) will be able to corral his caucus. 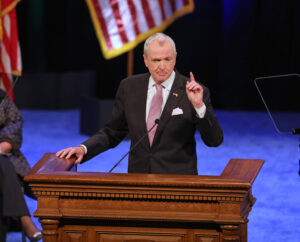 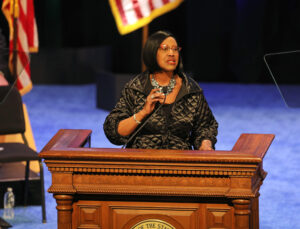 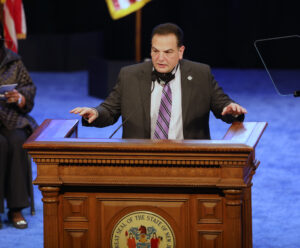 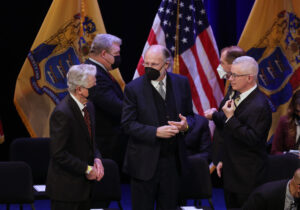 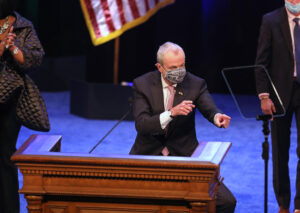 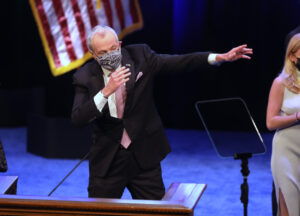 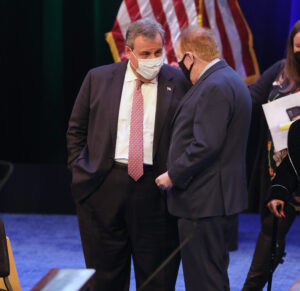 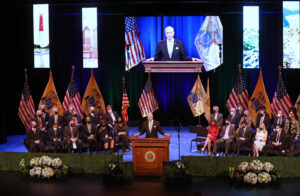 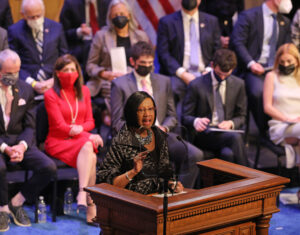 The governor appeared to take note of the electorate’s mood in Tuesday’s speech, promising to cut residents’ property tax burden and to make health care and university tuition more affordable in the Garden State.

“Each of our administration’s first four years have ranked among four of the lowest year-over-year increases in property taxes on record,” he said. “But I’m not going to be satisfied with just slowing property tax growth. I want to get us to a place where we can begin to see them go down.”

Though he provided little in the way of explicit detail, the governor said he would work to boost state aid to schools — school funding is a primary driver of property tax growth — and expand the state’s free preschool programs.

“The people of New Jersey want us to treat their tax dollars, whether they go to support their schools or improve their roads, as if they were our own, and we are,” Murphy said. “I pledge to you now, that the next four years will not see us stray from the path of fiscal responsibility that we are on.”

The governor’s second term begins as New Jersey claws its way out of its most recent COVID-19 surge, one that saw case counts balloon into the tens of thousands. Virus-related deaths have remained lower than those reported during last winter’s surge.

It’s possible Murphy will find himself with fewer tools — not to mention fewer allies — to handle the ongoing pandemic.

The governor last week reissued a public health emergency declaration after the Legislature refused to pass a resolution that would have prolonged some pandemic-related administrative orders and directives, many of which dealt with hospitals and long-term care centers. Murphy’s decision to announce he would continue a mask mandate for New Jersey schools appears to have angered legislative leaders enough that they refused to let the resolution come for a vote.

“It is our duty to ensure a recovery from COVID that reaches far and wide to include every New Jerseyan, and to set them alongside us on the path forward,” Murphy said Tuesday. “And it is our duty to get the American Dream working for everyone, as well.”

Lt. Gov. Sheila Oliver, a former Assembly speaker who also serves as commissioner of the Department of Community Affairs, was also sworn into her second term.

“To advance our standing in society, it is equally important to build the bench with women at all levels of leadership,” she said. “I encourage women and girls to keep going. Don’t be discouraged by what may seem to be barriers that hold you back and remember that no matter your gender or socioeconomic status, you have the same limitless potential as any other person on this earth.”

“Republicans will willingly and eagerly work with Murphy if he seriously addresses these issues,” Hugin said. “But should he choose to ignore the strong message the voters sent last November, then we will do it ourselves —from the halls of power to the ballot box.”

On COVID's two-year anniversary in N.J., mixed reviews for… by Dana DiFilippo March 4, 2022
COVID, economy dominate governor's annual State of the State… by Dana DiFilippo January 11, 2022
Fentanyl an increasing barrier to New Jersey battling its… by Stephen Stirling May 2, 2022