Republicans and Democrats have proposed two different maps that have new boundaries for the state’s 40 legislative districts.

As states across the country finalize their congressional and legislative district maps for the 2020s, something we constantly hear about is how gerrymandering is responsible for many of America’s political problems.

Gerrymandering is blamed for making congressional and legislative seats non-competitive and creating disproportionate outcomes for whichever party has the power to draw the maps. Critics say gerrymandering allows politicians to choose their voters, instead of voters choosing their politicians.

Yes, gerrymandering is bad, but gerrymandering is blamed for problems that are unavoidable in our single-winner elections. The most common solution to gerrymandering — redistricting by an allegedly neutral or bipartisan commission — eliminates only the most egregious partisan abuses, and still allows non-competitiveness to be the rule and disproportionate outcomes to continue.

Gerrymandering is not responsible for non-competitiveness. The culprit is the underlying geography of voters, where both liberals and conservatives self-segregate and Republicans don’t appeal to urban voters, while Democrats don’t appeal to rural voters. Yes, there are still millions of Republicans in blue districts and Democrats in red districts, but Americans are more likely than ever to live in partisan bubbles. That underlying voter behavior, not partisan mapmaking, is the larger reason for non-competitiveness.

Let’s look at federal election results from counties. County boundaries never change, yet counties have the same increase in non-competitiveness as congressional districts, whose boundaries are redrawn every decade. From 1996 to 2017, the number of counties considered not competitive in federal elections by the Cook Political Report rose from 1,784 to 2,753. 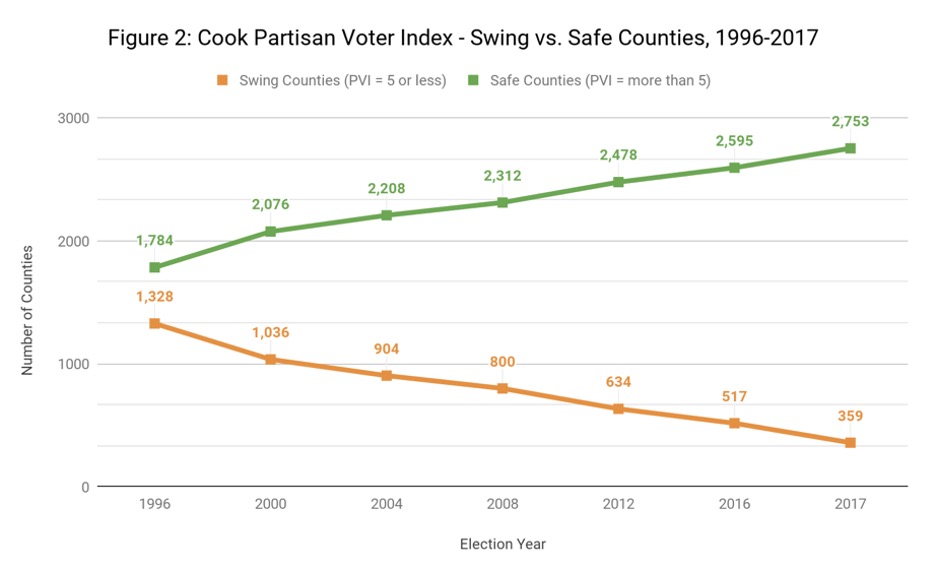 It is true gerrymandering can exacerbate disproportionate outcomes, but states using neutral commissions to draw their maps have the same problems gerrymandered states have.

In California, New Jersey, and Virginia — which all used commissions for their maps in the previous decade — the weaker party ended up with congressional representation equaling as little as one-third of its share of the party’s statewide vote total. That underrepresentation is tantamount to the disproportionalities that result from intentional gerrymandering in other states.

State legislative maps drawn by commissions are no fairer. I will use the New Jersey Senate as an example.

This imbalance is not that unusual when a legislature is elected using single-winner districts. Legislatures in Nevada, North Carolina, Pennsylvania, Minnesota, Arizona, Virginia, Wisconsin, and Michigan currently have or recently had artificial majorities. On the federal level, Democrats in 2012 won more votes nationwide than Republicans but captured only a minority of House of Representatives seats.

The real solution to disproportionate results and lack of competition is a different voting system called “proportional representation.”

There are several kinds of proportional representation, but what they have in common is they use districts with multiple winners per district, and candidates or parties must meet a certain threshold to be elected, not necessarily “most votes wins.” Instead of voting for one candidate, you can vote for a slate and your multi-representative district elects people in proportion to the share of the vote they get. If a party wins 30% of the vote, it gets 30% of the seats.

In proportional representation, gerrymandering is impossible because what matters is a party’s overall support, not where its voters live.

In proportional representation, all votes count equally, whether someone lives in a strongly Republican or Democratic area or a place with high turnout or low turnout. Artificial legislative majorities are impossible.

There is a right to a meaningful vote, not just to mark a ballot

The right to vote is sacred, but we should have a right to a meaningful vote, for a party or candidates that we believe in and not just an anti-vote against a party someone hates more. A universal right to vote is essential, but it is watered down when 90% of House and legislative districts are non-competitive and voters have unequal power.

Proportional representation would also allow alternative parties to become viable. In some places, this might mean more representatives from the left and right, but there is a huge void in New Jersey and American politics that could be filled by a centrist party. Thirty-five percent of Americans see themselves as “moderates,” which implies moderates would be the biggest beneficiary of voting reform.

There are no silver bullets in policy, but proportional representation would be a remarkable policy change creating a meaningful right to vote for a party one really believes in. It would preserve communities of interest, allow for minority representation, improve representation from a diverse group of people, and create the equal voting power that should be a foundation of democracy.

Jeffrey Bennett is a lifelong resident of New Jersey. He blogs at njeducationaid.blogspot.com on topics related to New Jersey's education aid, budget, migration trends, and economy, plus structural problems in the U.S. government. He has had other editorials published in NJ Spotlight News, Asbury Park Press, WHYY, ROI-NJ, NJ Education Report, and the South Orange-Maplewood Village Green.