“This budget is rooted in a renewed commitment to moving our state forward, creating opportunity for every family, and making our state more affordable,” Murphy, a Democrat who was re-elected in November, said in Trenton. “Moreover, this budget directly takes on the most stubborn affordability challenge that has faced our state for decades — property taxes.”

Headlining the governor’s budget plan is a replacement for the Homestead Benefit Program, which the governor wants to retire in favor of the Affordable New Jersey Communities for Homeowners and Renters Property Tax Relief Program. The newer plan would offer slightly larger property tax rebates for homeowners — an average of $682 versus Homestead’s $626 — and expand eligibility to a greater number of residents, including renters with an income of less than $100,000.

Eligible renters would receive a minimum rebate of $150. Elderly tenants or those with disabilities earning up to $70,000 annually would be eligible for $250.

“Every single budget has provided direct relief through any number of standing direct-relief programs,” Murphy said. “But for far too long that relief was delivered as an afterthought. It was the scraps left over after everything else was done and the number of taxpayers eligible to even get it was gutted year after year.”

The new rebates are expected to cost roughly $900 million in the first year, rising to $1.5 billion by fiscal year 2025.

The senior and disabled citizens’ property tax freeze, another tax relief program, would see its funding reduced by $20 million, a proposed adjustment that Treasury officials said was made to account for a drop in applicants.

The governor is also asking to waive fees for driver’s license renewals, marriage licenses, and some health care professional licenses for the coming fiscal year. Murphy also wants residents to be allowed to visit all state parks cost-free for 12 months. Altogether, those waivers are expected to cost the state about $60 million in lost revenue.

State revenues are expected to rise overall, though Treasury officials have warned of uncertainty around future collections after months of surging revenues.

The state’s income tax is expected to bring in more than $18.1 billion in the coming fiscal year, an increase of about 4.5% from the current fiscal year. Revenue from the income tax is constitutionally dedicated to property tax relief.

Sales tax collections are expected to see a more constrained increase of 2%, up from a little more than $12.1 billion to just under $12.4 billion.

School funding aid would rise by $650 million, to $9.9 billion, under Murphy’s proposal.

“We were told we’d never be able to properly and fully fund our school funding formula,” Murphy said. “Standing here today, together we have invested more in our public schools than at any other point in our state’s history — and we’re on the path to fully funding our obligation to our kids and their parents, our educators, and our property taxpayers.”

The governor’s proposal would leave the state with more than $4.2 billion in its undesignated surplus but would completely drain what’s known as the state’s rainy day fund, which is meant to guard against economic downturns.

Murphy intends to make the state’s second full pension payment in a row, putting roughly $6.8 billion toward the debt. That contribution would have been roughly $6.9 billion had the state not put an additional $506 million — for a full payment of about $7.4 billion — to its pension obligations last year.

Murphy is also asking the Legislature to approve a series of expenditures using federal aid disbursed to the state under the American Rescue Plan, but many of those proposals are in flux without dollar values attached to them.

The state is sitting on $3.1 billion in unallocated ARP funds. The administration wants $305 million to help pay for the construction of more than 3,300 affordable housing units and $53 million for a direct assistance program for residents who file taxes with an individual taxpayer identification number. Individual taxpayer identification numbers are used by filers without Social Security numbers, like undocumented immigrants.

Any of those expenditures exceeding $10 million must be approved by the Joint Budget Oversight Committee.

Republicans — and more recently Democrats — have pushed for the state’s federal funds to be used to repay federal unemployment loan advances used to prop up New Jersey’s unemployment trust fund, which was drained by skyrocketing jobless claims during the pandemic. The drained fund prompted an automatic increase on an unemployment insurance tax on employers that business groups have urged the state to head off.

The governor also proposed depositing another $1.3 billion into New Jersey’s debt defeasance and prevention fund. That fund, created last year using $3.7 billion borrowed to plug a budget hole that never materialized, was used to pay down other, higher-interest debt and forgo borrowing for capital projects.

NJ Transit’s operating budget would continue to be propped up by transfers from its capital budget and the state’s clean energy funds under Murphy’s plan. The capital-to-operating transfer and the clean energy fund transfer would remain level at $362 million and $82 million, respectively. The clean energy fund pays for incentives to get residents, businesses, and local governments to adopt energy-efficient technologies.

The beleaguered transportation network would get another $100 million from the general fund and $746 million from an agreement reached last year with the New Jersey Turnpike Authority. The Turnpike Authority money represents a dedicated funding source for NJ Transit, something advocates have pushed the state to institute for years.

“With solid investments in infrastructure and fixing longstanding problems — from getting rid of the lead pipes that contaminate drinking water to getting NJ Transit back on track — this budget focuses on strengthening our state from the inside out,” Murphy said. 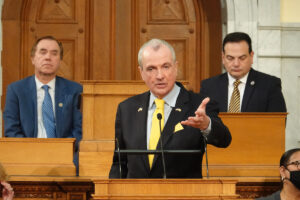 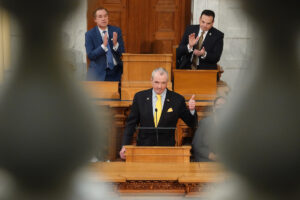 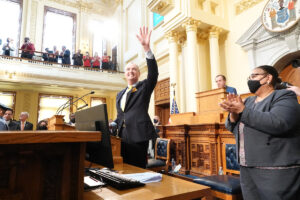 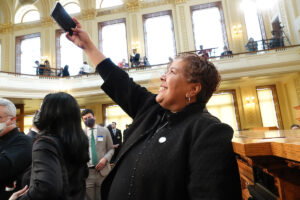 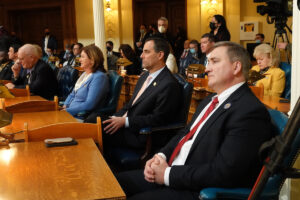 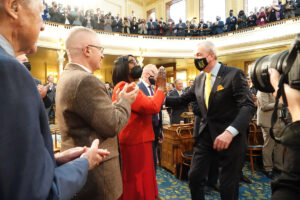 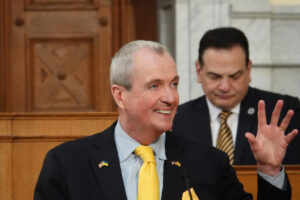 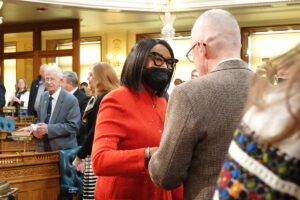 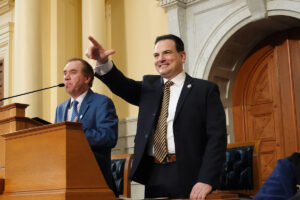 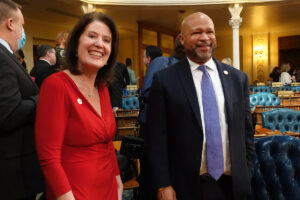 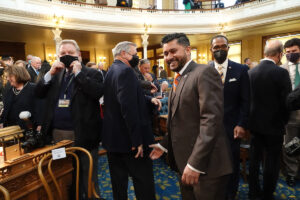 Murphy’s hourlong speech led with a nod to the crisis in Ukraine, with the governor calling for “an end to the unprovoked and desperate aggression of the Putin regime against the free people of Ukraine” and His Eminence Metropolitan Antony of the Ukrainian Orthodox Church of the United States providing the invocation.

Republican lawmakers hosted a response after Murphy concluded his speech, criticizing the governor for waiting too long to propose how to spend the $3 billion in unallocated federal funds. They said Murphy isn’t doing enough to slash property taxes or halt the business tax intended to replenish the unemployment trust fund.

“Yes, it’s wonderful, we’re flush with cash. The real question is, what are we doing to do with it? How sustainable is it? And what path should we follow going forward?” said Sen. Declan O’Scanlon (R-Monmouth).

GOP lawmakers admitted it’s the best of the five budgets Murphy has proposed, with Assembly Minority Leader John DiMaio calling it “less bad” than the others.