Marie Holmes, of Colonia, joined the others in line outside of Zen Leaf in Elizabeth on April 21, 2022, the first day of recreational sales of marijuana. (Photo by Amanda Brown for the New Jersey Monitor)

Nearly 48 years ago, Marie Holmes sparked a joint for the first time. Since then, she’s experienced the stigma surrounding cannabis usage, the ways consuming weed has changed, and finally, legalization in her home state.

“And now I get to use my senior discount,” she laughed. “It’s been way too long since we needed this in New Jersey.”

Holmes got in line early Thursday morning with hundreds of others outside Zen Leaf in Elizabeth, one of 13 medical dispensaries authorized to sell recreational cannabis on the first day New Jersey’s recreational marijuana market opened. Sales started as early at 6 a.m. in some locations, and lines continued to wrap around storefronts past noon.

People felt the excitement in the air. The long lines and crowded parking lots didn’t put a frown on anyone’s face — people were happy to finally have their chance to buy legal weed. Crowds included everyone from teachers to plumbers and from young adults in their 20s to retirees who started smoking in the ’60s. 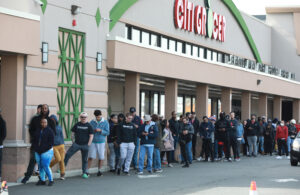 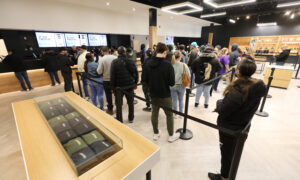 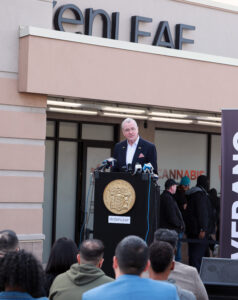 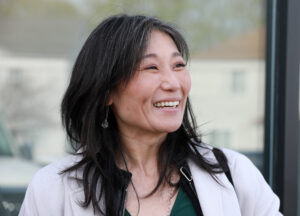 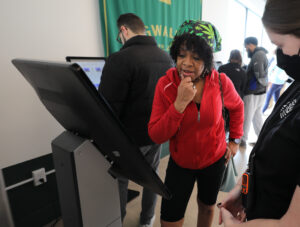 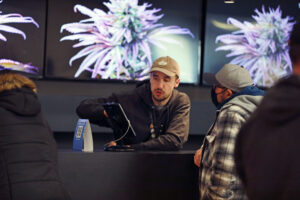 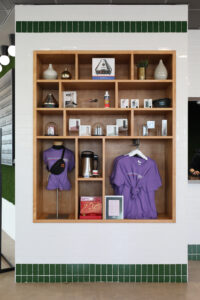 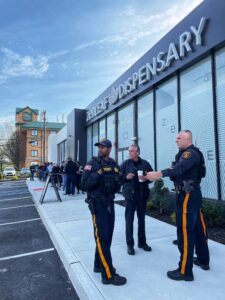 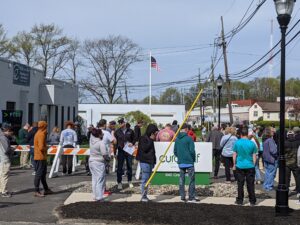 Long-time pot users and curious first-time buyers alike were greeted with velvet ropes, friendly staff, and music and balloons. Food trucks handed out free donuts while cops directed the overflowing traffic. Marijuana enthusiasts sported cannabis bandanas, green and black flags, and punny shirts. Some people were so entertained by it all that they filmed their whole experience.

“I had to see it for myself. I’m walking around pinching myself,” said Colin William of South Orange, who bought 3.5 grams of hybrid flower at RISE in Bloomfield. He showed off the black jar the marijuana comes in and said the dispensary was as cool as those he’s visited in California.

More dispensaries are expected to open within the year as the state’s Cannabis Regulatory Commission moves forward with permit approvals.

Gov. Phil Murphy made an appearance at the Elizabeth Zen Leaf, where the line snaked around the storefronts along the busy Route 1 North corridor. Drivers circled the parking lot before getting on the 90-minute line, and trucks stopped in traffic honked their horns in celebration.

“I know a lot of New Jerseyans had been waiting for today, including yours truly,” Murphy said, alluding to the finally fulfilled campaign promise to legalize weed he made during his first gubernatorial run in 2017.

He didn’t buy anything.

Getting to the legal sales date was a “cornerstone of social and economic promise,” he said. The second-term Democratic governor congratulated workers and eager buyers at the Elizabeth store during a tour of the facility.

Jamie Pomeroy, who works for Zen Leaf’s owner Verano, said dozens of people already were lined up when he arrived at 7 a.m. — two hours before recreational sales started there. The store expects 700 sales today but will likely sell more, one worker said.

He held the door open as customers streamed out the store. Some cheered, holding up their white paper bag containing cannabis consumables. One said he couldn’t stop to talk because he was so excited to smoke after two hours of waiting in line.

The lines will die down in the next few days, Pomeroy predicted, but the hype will continue for a long time.

Holmes said she came to Zen Leaf in part for the novelty of the first day of legal weed. She’ll probably depend more on the black market until the legal market’s prices fall and selection expands, she said.

“I don’t want to pay $300 for an ounce. Maybe when there’s edibles and lozenges,” she said. “But I wouldn’t miss today for the world.”

A party at RISE before sunrise

Just before the sun rose, people were already making their first purchases of weed at RISE in Bloomfield. A man played the steel drums as people lined up along the otherwise inconspicuous gray building.

Natalie Fernandez, 42, of Bloomfield, was excited she could stop buying weed on the black market.

“God forbid you get arrested when it’s something recreational now. Plus, it’s so much safer and I know I’m not going to have an adverse reaction,” she said.

She didn’t intend to buy anything Thursday. She heard about it on the radio and said she needed to witness the history. Once she got there, she couldn’t help but buy a few grams of the Animal Face hybrid strain. She had to use the ATM, since sales are cash-only or payment through the Aeropay app.

She’s not worried about the stigma that still surrounds weed use, she said. She’s a recovering alcoholic who uses marijuana but didn’t get a medical card because of the price and doctor visits.

“It just seemed like a waste of money when I could buy it on the street, but it’s kind of dangerous,” she said. “Now I have a store and it’s safer, I’m not double-parked in a car, I’m not waiting on some guy. And this is actually a lot of fun.”

Camera crews and workers bustled inside the sleek dispensary while customers tried to decide between marijuana flower and oil cartridges — the only current options — at a kiosk. Once done, they lined up to pay at the cash register, where an employee presented their purchases in a discreet paper bag that, by law, they’re not allowed to open until they get home.

“It’s about time. People gotta realize this is the good, and tobacco is the bad,” said Russ, 68, of North Arlington, as he left the dispensary. “I can’t wait to go home and enjoy this. At my age, better late than never.”

He said his experience exceeded his expectations, and he didn’t think the prices were bad, considering the quality. He couldn’t remember when he first sparked up but plans to be a dispensary customer for as long as he smokes.

“I left out milk and cookies for Willie Nelson last night,” he teased.

In the bright lobby of the Zen Leaf Dispensary in Lawrenceville, the rich baritone of Bing Crosby filled the air.

“It’s beginning to look a lot like Christmas,” Crosby crooned, and all around, people startled at the sound of holiday music in April.

But to Zack Swan, national director of retail marketing for Zen Leaf’s owner Verano, it was a fitting soundtrack for the day.

“This is very on-brand!” he laughed. “It’s cannabis Christmas!”

Outside, it did look like Christmas, with shoppers lined up around the building and a jammed parking lot. So many people were in line by the time the dispensary opened its doors at 8:45 a.m. that staff set up stanchions and ropes in the rear parking lot to keep order and a small army of police officers directed traffic and stood ready for trouble.

Tom Lauria of Manchester was first in line. He arrived at 7 a.m., two hours before the dispensary rang up its first sales, with his sights set on buying edibles and vapes.

“I never thought I’d see this happen,” Lauria said. “To buy legal cannabis with police in the parking lot is crazy.”

Saquan Peace of New Brunswick marveled at that too. He was caught by police with a joint a few times when he was underage, and he thinks the charges are still on his record.

He couldn’t stop smiling as he stood in line, saying he was excited for “the experience” of legally buying recreational marijuana.

“I didn’t really think this would ever happen,” he said, adding that he wasn’t sure what he’d buy and whether he’d spend the afternoon enjoying his purchases.

Beside him, his mother, Rita, rolled her eyes.

“He’s going to burn the house down,” she laughed. “He already sets off the smoke alarms.”

State officials had worried dispensaries would run out, overrun by recreational users who have waited 18 months for the legal market to start.

But Swan was confident they’d be fine. While 10 cultivators grow marijuana in New Jersey, only two were approved to produce for the recreational market. But Verano was one of them, Swan said.

“We’ve been building up to this opportunity for some time, and our team has been working very hard,” Swan said. “We don’t expect to run out.”

Despite the crowds, customers waited patiently in line, some giddy with anticipation as they inched closer to the door.

“I’m 21, so this is perfect timing for me,” said Chad of Bordentown, who said the 18-month wait for the market to start didn’t affect him.

Like Chad, some customers didn’t want to give their last name, or any name at all.