The cheap, synthetic opioid is now found in most overdose deaths

In 2012, fentanyl was found in just 42 of the 1,223 drug overdose deaths in New Jersey, according to the state medical examiner’s office. Seven years later, it was found in the bodies of 2,248 people — 75% of the drug deaths in the state. (Photo by Drew Angerer/Getty Images)

The opioid crisis, on paper, should be a Trenton policy success story. In the past decade, the Legislature passed dozens of bills aiming to expand access to treatment, education, and life-saving drugs like naloxone, and fundamentally alter how many drug crimes are prosecuted. Most passed with bipartisan support. Hundreds of millions of dollars were earmarked for the fight.

But virtually every front in the fight against opioids has changed in the last five years. And New Jersey isn’t winning.

“What happens in the halls of legislation does not trickle down to the people walking the streets,” said Leslie Harrison, treasurer of the New Jersey Harm Reduction Coalition.

Today, a group of synthetic drugs led by fentanyl has poisoned the drug supply, killing in record numbers as it’s mixed with or sold as everything from heroin to cocaine to PCP. Field workers say overdose reversal drug naloxone is hard to come by, and local stigma keeps treatments like buprenorphine and methadone out of reach for many. And people of color and in rural communities are dying at alarming rates not seen in years, worrying experts further that the most vulnerable communities are now being left out of the state’s response.

“It’s a huge marker of disparity in access,” said Dr. Kaitlan Baston, medical director at the Urban Health Institute at Cooper University Health Care. “We still don’t have equity in health care in this country. People with privilege are going to get access to treatment faster and sooner.”

Just a few years ago, the opioid crisis was a heroin crisis. Today, heroin barely exists on its own in the illicit drug market.

It’s been almost entirely subsumed by fentanyl, a synthetic opioid that’s cheaper to make and several times more powerful than heroin. In 2012, fentanyl was found in just 42 of the 1,223 drug overdose deaths in New Jersey, according to the state medical examiner’s office. In 2019, the most recent data available, fentanyl was found in the bodies of 2,248 people — 75% of the drug deaths in the state.

Its saturation of the market goes deeper.

Fentanyl is also being sold as or cut with other drugs, which is sought out by users in search of a better high, but also unwittingly sold to others.

“We have clients coming in who say their drug of choice is cocaine or marijuana, but they’re testing for fentanyl,” said Robert Budsock, CEO of Integrity House, one of the largest drug treatment providers in the state. 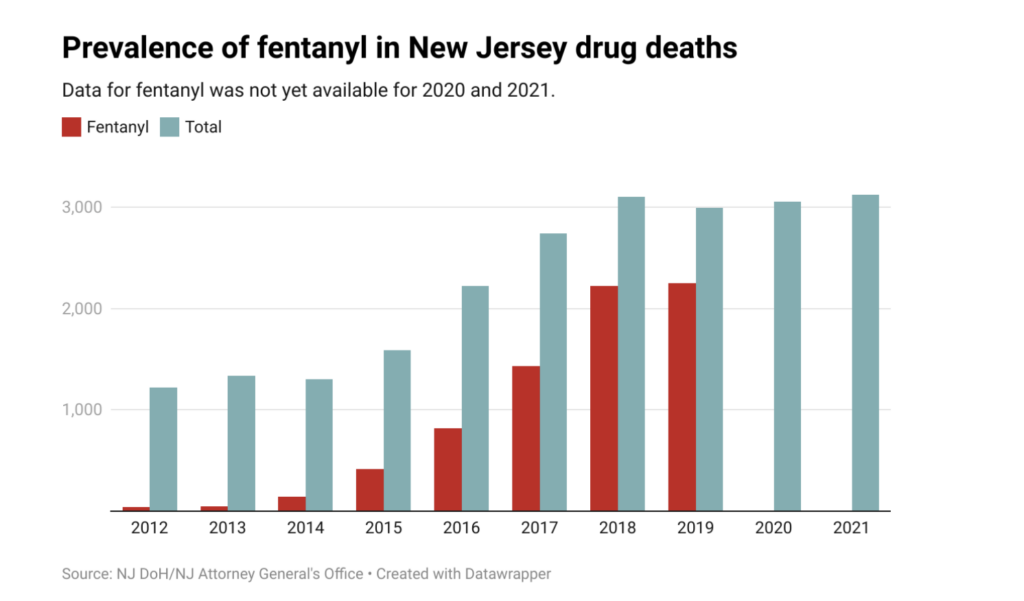 Analogues of fentanyl and other synthetic opioids now sweep through the market with regularity, some causing spikes in deaths, others spreading fear.

Former Gov. Jim McGreevey, chairman of the New Jersey Reentry Corp., said his workers are concerned about isotonitazene, also known as iso, an ultra-powerful drug that’s been found in Florida and Washington, D.C., but has yet to be found in New Jersey, according to the state medical examiner. Xylazine, which causes severe lesions and agonizing withdrawals, has been found in a handful of cases in New Jersey after pervading the Philadelphia supply. And State Medical Examiner Andrew Falzon said paraflurofentanyl, a more powerful analogue of fentanyl, has been found in more than 240 drug overdose victims in recent years.

The most recent data from the state medical examiner shows in 2019 the state’s illicit drug supply was already a poisonous mess.

Roughly 80% of victims have more than one drug in their system, said Dr. Andrew Falzon, the New Jersey medical examiner.

“Today we rarely see heroin in the body by itself,” Falzon said.

It’s all killing more people. In 2020 and 2021, more than 3,000 people died of drug overdoses, the latter year setting a grim record. So far in 2022, at least 952 people have died of suspected drug overdoses, about the same pace as previous years.

But who is dying has changed, data show. A decade ago, suburban white people in their 20s and 30s were dying in record numbers. But deaths among whites have dropped significantly, and according to a geographic analysis of naloxone uses in New Jersey, overdoses are now occurring most frequently in urban and rural zip codes.

State data show since 2019 naloxone has been used far more frequently in rural centers like Vineland and Bridgeton, outpacing places like Toms River and Woodbridge — once suburban centers of the opioid crisis.

And nearly 27% of the 952 suspected drug deaths in New Jersey this year are Black people, who make up about 13% of the state’s population.

“When you look at those numbers you wonder who may be getting greater access to treatment and recovery services,” said state Sen. Joseph Vitale (D-Middlesex), who has sponsored dozens of bills to support opioid users. “You want to be where the people are. You don’t want to be in an area where you have to drive miles and miles to get the treatment you need.”

When you ask those on the front lines of addiction in New Jersey what’s missing, most point to naloxone.

Naloxone, most commonly seen as Narcan, is a drug that serves one purpose: It immediately reverses the effects of an opioid overdose. Most commonly administered as a nasal spray, it near-instantly blocks the receptors affected by opioids in the brain, often allowing an overdose victim on the brink of death to be revived in a few minutes. Recipients generally suffer no long-term side effects. All it does is save lives.

But though the state has passed legislation to increase its ubiquity in New Jersey, local experts say it remains hard to come by for the people who need it most. Pharmacies can now carry it and give it to a person without a prescription, but only if they also provide the user with information about opioid use. For many rural and urban users, the local pharmacy carrying Narcan could be miles away.

“The fact is these pharmacies that you would hope would have it available just don’t exist,” said Leslie Harrison, treasurer at the New Jersey Harm Reduction Coalition.

It’s unclear what’s causing the disconnect, which is perplexing for state officials. The Department of Human Services has distributed more than 130,000 Narcan kits in the last four years, issuing the drug to municipalities, treatment centers, pharmacies, emergency officials, and — following a training session — ordinary citizens.

“I don’t know that everyone is aware that this overdose antidote is available,” said Valerie Mielke, assistant commissioner of the Division of Mental Health and Addiction Services. “One of the focuses we have now is how we can best reach those populations that are underserved.”

The need is clear. Naloxone is still frequently administered by EMS officials and police, who themselves, at times, bristle at the burden of repeatedly administering the drug. Since 2019, it has been administered more than 42,000 times by them alone, according to state data.

New Jersey has also made reducing barriers to medication-assisted treatment and harm reduction a priority since the administration of Gov. Chris Christie. Here too, researchers and field workers say barriers remain, often propelled by local opposition.

“It’s a lot of people not understanding the difficulties of the disease of addiction and feeling like it’s just something that’s not happening where they are,” Harrison said. “It’s still a battle. We have communities that still believe it’s not in their neighborhood at all … it’s there.”

The most visible local opposition in recent years has been to syringe exchanges, which have been proven to dramatically reduce the spread of disease among drug users, but frequently produce fears of crime in areas they’re placed.

Opposition has been so persistent Gov. Phil Murphy recently signed a bill into law that, in part, strips municipal authority to close or prevent the opening of a syringe exchange in its borders. The bill was specifically in response to efforts by the Atlantic City Council to close the syringe exchange that has long operated within its borders.

But more pressing now, advocates say, is the need for better access to medicated-assisted treatment, like buprenorphine or methadone. Buprenorphine, often sold as Suboxone, is only available via prescription and methadone distribution remains highly regulated.

Baston, of Cooper University Health Care, said the research is clear that both treatments are effective at helping people addicted to opioids remove illicit drugs from their lives, but stigma remains across the United States and New Jersey.

Baston and others noted even as New Jersey has expanded access to drugs like buprenorphine, legislators still keep a tight leash on who can access it and how. That’s doubly true of methadone. And local opposition to facilities offering medicated assisted treatment remains fierce in many parts of New Jersey.

These factors, along with others, can influence how users and their families come to view certain types of treatment. Providers told the New Jersey Monitor that misconceptions about medicated assisted treatment remain common.

“Some people still don’t understand the difficulty of the disease of addiction,” Harrison said.

Baston said a starting point would be making both treatments more freely available.

“It feels like a straightforward decision,” Baston said. “Change is hard, but for us it’s really just policy barriers right now.”

Trenton has taken an aggressive stance on the opioid crisis dating back to the Christie administration, largely shifting from a law enforcement model to one more focused on outreach and treatment.

The Legislature has passed dozens of bills that have increased access to and funding for in-patient beds, eliminated some of the red tape around medicated assisted treatment, and bolstered outreach and recovery coach programs.

New Jersey also vacated tens of thousands of marijuana convictions ahead of the drug’s legalization — marking a significant shift in how drug crimes are prosecuted in the state.

And the bills Murphy signed into law designed to expand the state’s syringe exchange network are the most significant in decades.

Vitale, chair of the Senate Health, Human Services and Senior Citizens Committee, authored or sponsored many of those bills. When he spoke to the New Jersey Monitor, his frustration was clear, but he said there was more to be done.

Vitale noted insurance reimbursement rates for buprenorphine are poor, which has led to fewer prescribers offering the treatment.

New Jersey’s coffers are flush with cash to continue the battle. The state received $641 million from a nationwide settlement with Johnson & Johnson over its role in the opioid crisis. A bill to set up an advisory panel to distribute the funds passed the Senate unanimously and is being reviewed by the Assembly budget committee.

But there often remains a chasm between state and municipal actions on addiction treatment. New Jersey’s recent history is littered with municipal attempts to close syringe exchanges and deny zoning for treatment centers. Applications for them still routinely bring out residents fearing drug users roaming the streets of their communities.

Mielke, the assistant commissioner of the state mental health and addiction services division, said this remains a challenge.

“There are a lot of misperceptions out there,” she said.

Stephen Stirling is a data reporter and editor, with work appearing on USATODAY.com, PBS FRONTLINE, NJ.com, FiveThirtyEight.com, in The Star-Ledger and elsewhere. He has covered drug policy in New Jersey since 2013.