In fight to restore a historic battlefield, state urged to support heritage tourism

Historic sites a $2B draw, but many have fallen into disrepair

The Colonnade is a national historic landmark that marks the spot where farmer William Clarke’s house once stood on the Princeton Battlefield. (Photo by Dana DiFilippo | New Jersey Monitor)

Mention Princeton and the Revolutionary War likely isn’t what springs to mind.

But the town best known for its Ivy League university played a pivotal role in American independence, with one of the war’s most influential battles won there.

Preservationists are working to make the Princeton Battlefield State Park as big a draw as Valley Forge, Independence Hall, and other more nationally known Revolutionary War sites — and they have a deadline, with the nation’s 250th anniversary approaching and the tsunami of tourists they hope it’ll bring.

They face an uphill battle. Public funding for state parks has flatlined for years, and New Jersey doesn’t tend to or tout its historic sites the way states like Massachusetts and Virginia do, critics say.

“The problem with tourism and marketing of tourism in New Jersey is that it has been focused on two places, Atlantic City and the Jersey Shore,” said Patrick Murray, a trustee of the Crossroads of the American Revolution National Heritage Area. “And heritage tourism has taken a backseat, in part because we really don’t have a heritage tourism identity, nor do we have a critical number of sites that are open that tell a cohesive story so that you can market New Jersey as a heritage tourism destination.”

The Crossroads of the American Revolution National Heritage Area covers 2,155 square miles in New Jersey and about a dozen sites, including the Princeton Battlefield, Fort Lee Historic Park, and Washington Crossing State Park. It’s one of 55 national heritage areas in the United States, but the only one wholly dedicated to the American Revolution.

That’s why it’s important for New Jersey to spend more to protect it, Murray said.

Many of the state’s historic sites are crumbling and neglected. Of a $500 million capital improvements backlog in New Jersey’s 51 state parks, about $100 million are slated for historic sites, Murray said.

He and other preservationists have been lobbying state officials to invest at least $40 million to improve the state’s heritage sites in time for the Semiquincentennial.

“Washington crossing the Delaware, the Battle of Trenton, and the entire 10 crucial days leading through the Battle of Princeton was a turning point in world history,” Murray said. “This is not even something that’s important to just America — historians acknowledge this. If George Washington had lost the Battle of Trenton, the American Revolution would have ended right then and there. So New Jersey’s contribution to the spread of democracy around the world starts on the streets of Trenton, and you wouldn’t know it if you walked around Trenton today.” 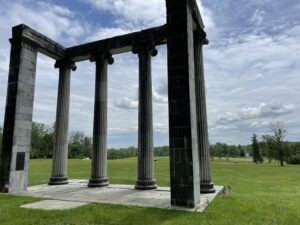 The Colonnade is a national historic landmark that marks the spot where farmer William Clarke's house once stood on the Princeton Battlefield. (Photo by Dana DiFilippo/New Jersey Monitor) 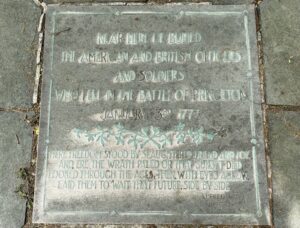 A weathered marker shows the site where unknown soldiers who died during the Battle of Princeton were believed to have been buried. A 2017 survey showed no human remains there though. (Photo by Dana DiFilippo/New Jersey Monitor) 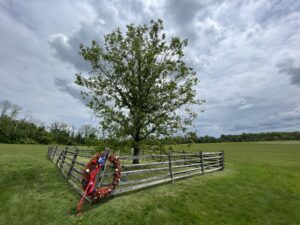 The Mercer Oak was a tree that withstood fighting during the Battle of Princeton, until it collapsed of old age in 2000. A new tree that sprouted from an acorn off the original tree is protected by fencing. (Photo by Dana DiFilippo/New Jersey Monitor) 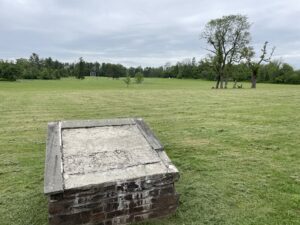 A crumbling stone marker used to inform visitors about the Battle of Princeton that occurred on the acreage there. (Photo by Dana DiFilippo/New Jersey Monitor) 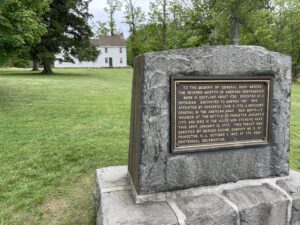 General Hugh Mercer, for whom Mercer County is named, died in the Thomas Clarke House after getting wounded during the Battle of Princeton in 1777. (Photo by Dana DiFilippo/New Jersey Monitor)

The Thomas Clarke House served as a field hospital after the Battle of Princeton in 1777 and now acts as a visitor's center at the Princeton Battlefield State Park. (Photo by Dana DiFilippo/New Jersey Monitor) 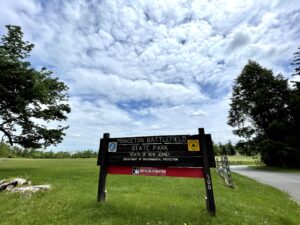 The entryway to Princeton Battlefield State Park would be relocated under a $10.6 million plan supporters have to restore the park. (Photo by Dana DiFilippo/New Jersey Monitor) 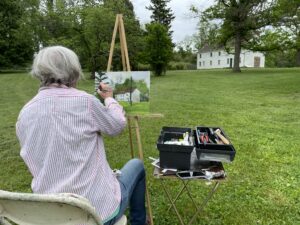 A painter paints the Thomas Clarke House in the Princeton Battlefield State Park. The house is the only structure still standing since Continental Army soldiers sought British troops there in a pivotal Revolutionary War battle. (Photo by Dana DIFilippo/New Jersey Monitor) 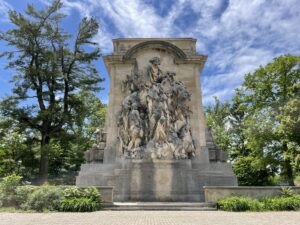 The Princeton Battle Monument outside Princeton's borough hall is the century-old limestone sculpture that commemorates the Battle of Princeton. It shows George Washington leading his Continental Army troops and the death of General Hugh Mercer. (Photo by Dana DiFilippo/New Jersey Monitor)

Ten years ago, the Princeton Battlefield was on the National Trust for Historic Preservation’s list of most endangered places. And in some ways, things still seem bleak.

The verdant field where the Battle of Princeton once raged is just a tenth of the actual battlefield. Houses, roads, and other development have taken over the rest.

The apple orchard where Continental Army soldiers skirmished with British troops is long gone. A stone marker that once explained to visitors what they were looking at is crumbling, its lesson lost to the ravages of weather.

And while a plaque purports to mark the mass gravesite of 36 of the battle’s 300 fallen soldiers, researchers in 2017 found no human remains there, leaving their true resting grounds a mystery.

Washington, D.C.-based nonprofit the American Battlefield Trust has a $10.6 million plan to make the battlefield a national draw.

First up is transforming the 95-acre park into more of what it looked like 245 years ago by relocating a parking lot and restoring the orchard, fence lines, and the path known as Sawmill Trace that soldiers marched on to battle, among other things.

Finding funding to carry out the plan is the next challenge, said Michael Russell, president of the Princeton Battlefield Society.

New Jersey’s state parks have a $500 million backlog of capital improvement projects. Princeton Battlefield’s planned upgrades have languished on that list for years.

Two lawmakers introduced a resolution last month urging the New Jersey State Park Service to fund a new visitor’s center at the battlefield. Larry Hajna, a state Department of Environmental Protection spokesman, said the center isn’t on the list of 20 heritage sites where improvement work is underway or imminent.

Until the park can secure public money to institute the plan, park supporters will continue trying to privately fundraise, Russell said.

“We are trying to draw the public in and make them aware not only of the historical Battle of Princeton, but also that we have a beautiful state park here we need to preserve,” Russell said.

Murray, who is also director of the Monmouth University Polling Institute, believes any investment in heritage sites — public or private — would be money well spent.

He pointed to a 2013 study showing heritage tourism drew nearly 11 million visitors in 2012, resulting in $2.8 billion in spending. That represented about 8% of total tourism spending in New Jersey, the study found.

That’s a huge impact, Murray said, considering “some of the sites are literally rundown. They’re falling apart, because the state has just simply neglected the maintenance of these sites over the past decade and a half. New Jersey is leaving untold billions of dollars on the table in heritage tourism by neglecting the potential of Revolutionary sites.”

In fight to restore a historic battlefield, state urged to support heritage tourism